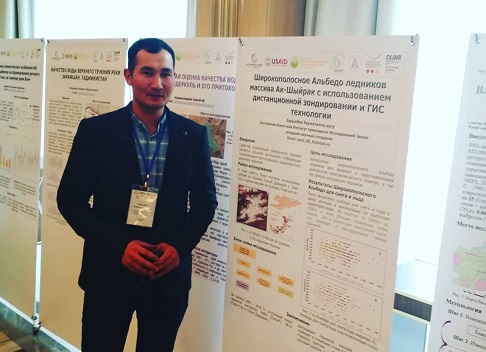 From April 3-4 was hold The Central Asian Climate Conference in Tashkent. Where took part junior researcher from our Institute Zarylbek Rahmatilla uulu .

On April 3, the conference participants took part in the work of the three sessional sessions, at which issues of global climate policy, national commitments were considered. The participants were provided with information on expected climate change trends, and the necessary joint measures to avoid the worst climate scenario were discussed. The panel discussion held at the end of the first day of the Conference provided answers to questions related to the transformation of climate and weather data, the timely provision of climate information and access to climate services in the countries of Central Asia.

Among the exhibited technologies were  presented  low-cost practices and devices that allow to grow and preserve crops in difficult climatic conditions, improve land fertility, increase water use efficiency, make more active use of alternative energy sources and energy efficiency

On April 4, the Conference participants considered issues related to climate finance, sharing experience in implementing investment climate programs in the countries of Central Asia, as well as new financial instruments available to farmers and entrepreneurs. On the second day of the conference, five parallel sessions also took place, at which knowledge management issues, the role of science in developing sound solutions were discussed, and issues of cooperation of civil society organizations to enhance climate action in Central Asian countries will also be discussed.